All Collections
Guides for OpenCounter Clients
Configuration
Why do we have to crosswalk your land uses?

Why do we have to crosswalk your land uses?

Written by Linh Vuong
Updated over a week ago

A primary goal of OpenCounter portals is to answer the question "What works where?", and to provide an answer that most individuals—who are unfamiliar with the details of the zoning code—are likely to understand.

The way we answer this question is to present users a with map showing all of the areas where their use is permitted (or conditionally permitted, or not permitted, etc.). If a user selects a land use, they should see every parcel where they might be able to locate their use.

When is a crosswalk needed?

Often times, a City will have multiple sets of land uses that don't clearly match up. Here are a few examples of common scenarios:

Crosswalks are also needed whenever the City refers to a land use by a name other than the land use itself. A few examples:

Can you give me a more detailed example?

In Oceanside, a "Bakery" use is defined in Coastal zoning code, but not in the other two zoning codes. However, bakery businesses are allowed in the Inland and Downtown zoning codes under the land use "Food and beverage sales".

If we left the three zoning codes separated without crosswalking the uses and an applicant searched for and selected a "Bakery" use, they would see a map that looked like the image below. 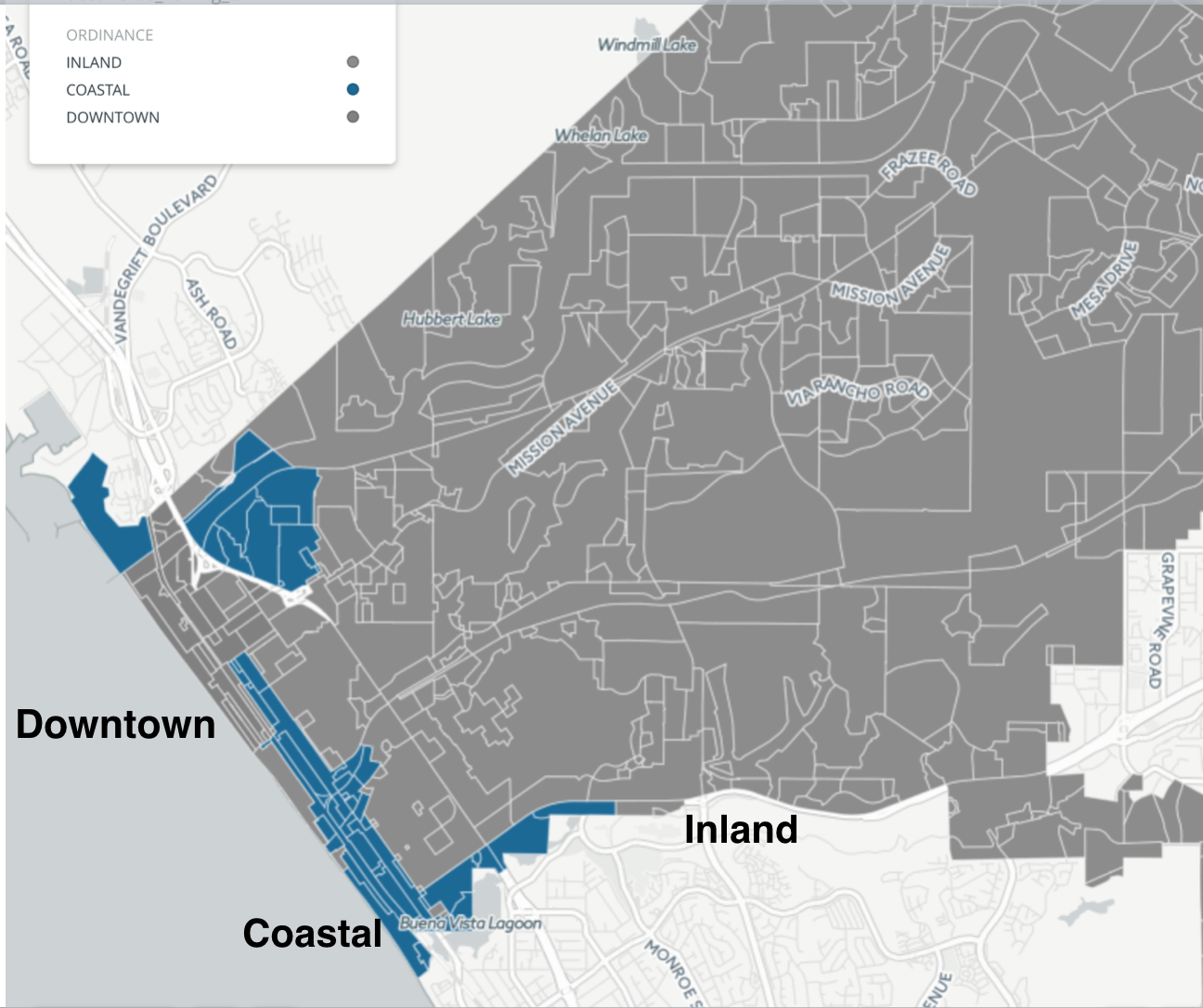 This map paints an incomplete picture for users. If someone searched for and selected "Bakery" instead of "Food and beverage sales" for their business, they would see areas where the business was permitted in the Coastal zone, and would think they could only open a business in a small part of town, when in fact their use is permitted in many other locations.

We don't leave this sort of discovery to chance. Instead, we ensure that the map shows everywhere a business might be permitted. 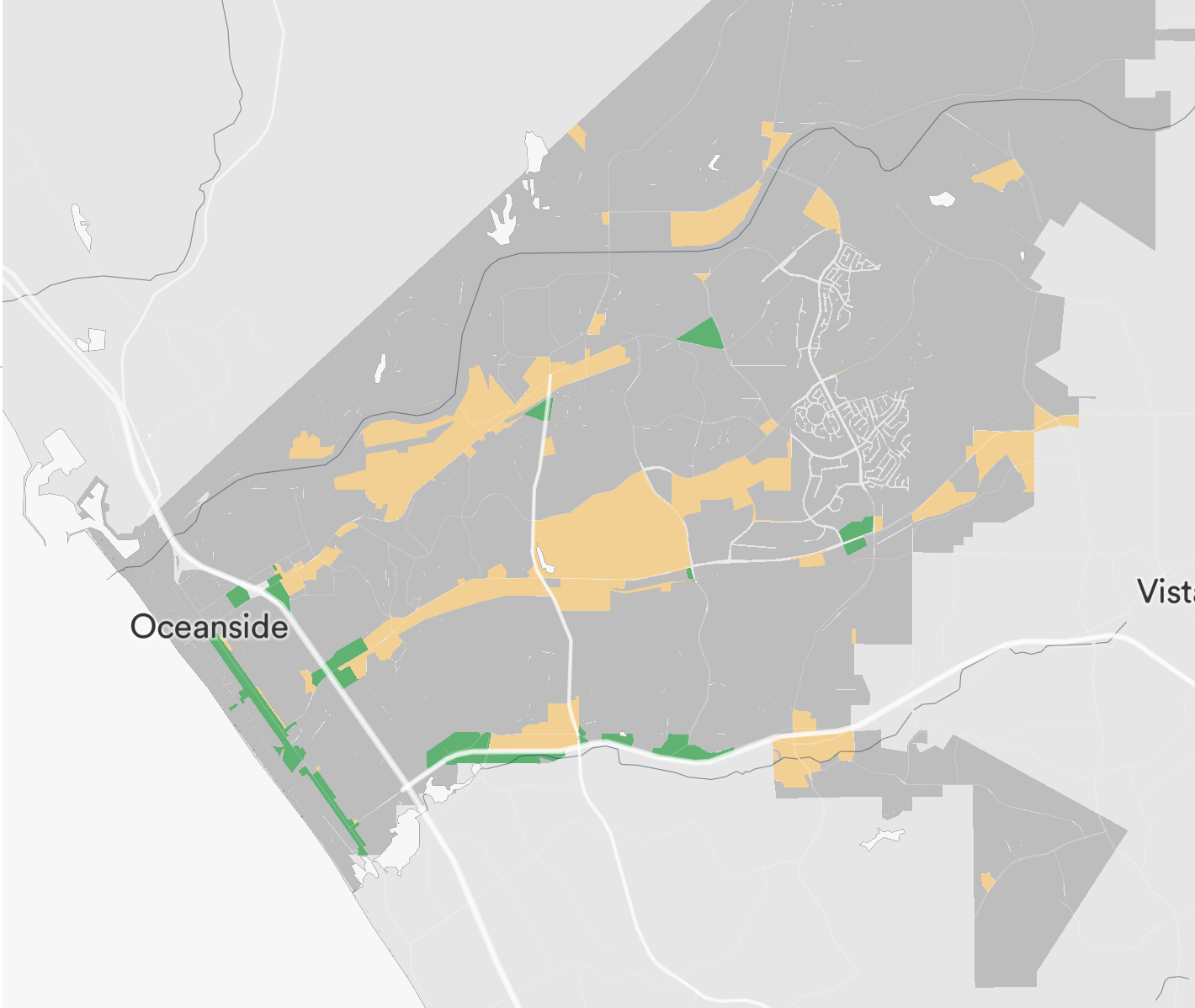 Here are the two maps side-by-side. You can see the left map (pre-crosswalk) only shows the use defined only in the Coastal zones, while the right map (post-crosswalk) shows where the use is permitted and conditional across the entire City of Oceanside. (Please disregard the color differences, as these two maps were made in different programs during the Oceanside configuration process. The left map shows where the use is defined regardless of where it is permitted, whereas the right shows the actual permissions.)

By doing this crosswalk, which we refer to as "normalizing regulations"—that is, standardizing regulations to a canonical set of land uses—applicants get a complete picture of where their project is permitted. A user unfamiliar with the zoning code—which is the target user base of OpenCounter portals—would not know that if they had selected a use with an entirely different name, their use would be permitted.

What work is required for a crosswalk?

OpenCounter project managers will produce a spreadsheet that shows land uses and permissions from the base ordinance (that is, the ordinance that is most prevalent). That spreadsheet will also list the uses found in other ordinances. Where possible, your project manager will match to the base zone land use. Sometimes, clear matches can't be easily determined, so we will ask City staff to review the work and make final determinations. We expect about a 1-week turnaround for crosswalk review.

1. Merge the use into an existing use by adding it as a keyword/synonym to an existing land use from the base ordinance. Permissions for the removed use will be applied to the land use in the base zone, thus completing the map.

This option is recommended if the use is functionally the same, such as bakery vs food and beverage establishment or gym and fitness facility.

2. Add the new use to the list of land uses. In this case, staff must determine what the permission should be for the zones where the use is not defined. Staff can decide to use permissions from a similar use, while keeping a distinct name.

Recommended if the use is different in terms of regulations and/or function, such as bar vs food and beverage establishment.

One note is that OpenCounter portals are not intended to be a full algorithmic zoning assessment—they are designed to get the user into the lane of travel they're likely to go down with the City (permitted, conditional, or not permitted) and to set expectations appropriately. While we model clearances as accurately as possible, the final determination is ultimately left to staff discretion.

Did this answer your question?